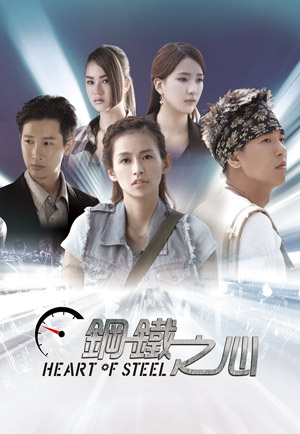 
A car accident has ruined 2 youngsters' dream and a home...Many years later; an unexpected accident made Ah Zhi wants to continue his dream again. However, will the dream succeed as he wished this time? The surging undercurrent of a quadrangular relationship and flawless struggle between dream and family...Only with a steel-like heart, the dream will then soar freely...

"Brother! Let's go out for some fun!" The sister's smile, and her hair dancing in the sunshine—the world momentarily seemed perfect, but the in the next moment the motorcycle tilted, the asphalt grew closer, the sound of screaming and bones breaking could be heard, and blood stains appeared. Ah-chih's father, Yang Wei is a mechanic who repairs cars and motorcycles for a living.

From childhood, Ah-chih had been interested in the machinery all around him. The Harley in a corner of the motorcycle dealership had been given by a German who had toured Taiwan. Ah-chih dreamed of repairing this Harley with his own hands one day, and then riding it on a tour the world. After Ah-chih wins admission to the department of industrial design at university, he shares the reputation of being an up-and-coming star with his friend and classmate Kao Ming. But in the end, Ah-chih's design genius and skill earn him even greater recognition than Kao Ming, who comes from a very talented family.

Although the two friends have great admiration for each other, Kao Ming feels a growing sense of jealousy toward Ah-chih's success. This situation is made worse when Ah-chih steals the heart of Yi-chun—the only woman Kao Ming has ever loved. Many years in the past, Kao Ming and Yi-chun had been lovers. Although Ah-chih could foresee what might happen, he still a bit distressed at heart. And while Yi-chun declares that she had gotten over Ah-chih, she begins to waver when he sees Ah-chih show up again. But when Kao Ming sees the ambiguous relationship between Yi-chun and Ah-chih, he chooses not to mention it. Because of the accident that happened that year, Yang Wei forbids Ah-chih from doing any motorcycle repair work. Nevertheless, due to various misadventures, Ah-chih gets to know Jen Yu-chieh, who will use unscrupulous means to make money, and accidentally causes the boss of the motorcycle modification shop—"Heart of Steel"—to be injured. Very reluctantly, and concealing it from Yang Wei, Ah-chih works as a substitute for Heart of Steel for a month. Yu-chieh's younger sister, Yu-hung is a technician for Heart of Steel, and she is a quirky and closed-mouthish person. Ah-chih regards Yu-hung as his own sister, but Yu-hung feels differently about their relationship. What direction will their affection for each other take…?