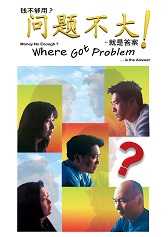 
This is a story of two friends, Ong Lai Huat, a businessman who runs a food manufacturing business and Richard Lim, chief executive officer of a computer firm, both successful in business and enjoying the good trappings of success.

Ong lives with his wife, two children and his father in a posh bungalow.

Richard, who likes to spend lavishly, lives with his wife Catherine in a penthouse apartment.

Faced with such situations, Ong seeks employment but no company is prepared to hire him because of his age and lack of working experience.

Richard has to sell his BMW and finds a job as a taxi driver. He keeps the secret of driving a taxi from his wife, who thinks that her husband is still doing very well. However, she finds out the truth from her friends. Hurt by her husband not telling the truth, she leaves him.

Ong starts a small shop producing flour products. Through hard work and perseverance, his business grows and in the end, he owns a factory selling flour products and also a chain of high-class restaurants.

Richard joins Ong’s company as chief executive officer and is eventually reconciled with his wife.